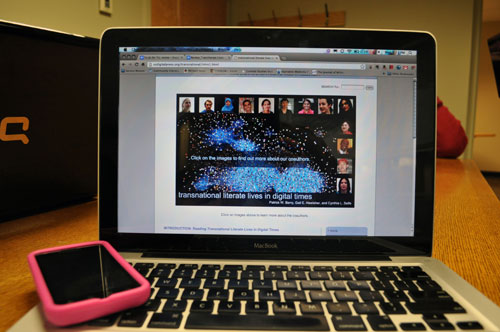 Gunther Kress and Theo Van Leeuwen (2001; p. 21-22) explain modes as “semiotic resources which allow the simultaneous realisation [sic] of discourses and types of (inter)action.” According to Kress and Van Leeuwen, the work of design is the “combination and selection of semiotic modes.” The designer must be mindful of the affordances of various modes and engage modes that will facilitate the greatest available means of persuasion for her rhetorical situation. In addition, Kress and Van Leeuwen see narrative as a mode “because it allows discourses to be formulated in particular ways…because it constitutes a particular kind of interaction, and because it can be realised [sic] in a range of different media” (22). Considering Kress and Van Leeuwen’s broad definition of mode, which considers narrative as a mode to be employed in the work of design, and given the range of modes employed in Transnational Literate Lives (including but not limited to narrative, still and moving images, and sound) we offer this brief overview:

As noted, Transnational Literate Lives is published in a Web text format, which allows viewers to interact in visual and aural ways, as they read the traditional, alphabetic text. Each section is organized thoughtfully, with columns on the left-hand side that allow viewers to easily skip ahead or return to portions of the text as they see fit. Additionally, the layout is neat and orderly, providing viewers who may not be as familiar reading Web texts with an easily navigable text to maneuver. The multimodal components vary from one section to the next, each meeting a specific need in a particular chapter, and allowing the viewer to engage with the text in richer ways. These visual and aural elements are clearly labeled, easy to access, and allow for a more engaging experience overall. Focusing on the importance vision plays in rhetoric and social action, Kristi Fleckenstein has stated that the consumption of language distributed using a variety of modes, allows us to “engage with texts differently” fostering a “more intense engagement” with a composition (155). This is the case for the reader of Transnational Literate Lives. The video and aural elements allow viewers a multifaceted experience, in which they can see things like facial expression, body language, inflection and tone of voice. These elements, as the authors explain, help to provide new, more nuanced ways of making meaning. In addition, most of these visual and aural video narratives are accompanied by written transcriptions and captions. This important addition provides a greater range of user accessibility. Furthermore, the various modes utilized in TLL are completely accessible on a smartphone.