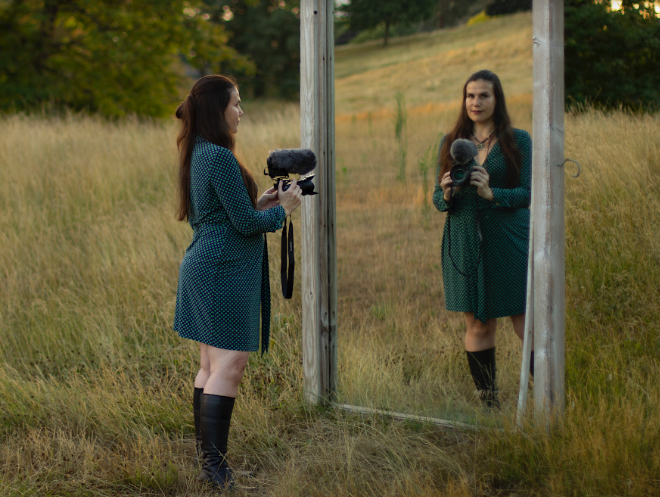 The name Alexandra Hidalgo may be familiar to those of you who are familiar with our books. Her video book, Cámara Retórica: A Feminist Filmmaking Methodology for Rhetoric and Composition, was published in January of 2017 by our press and shows readers how they can re-vision composition. In her introduction Hidalgo explains that the book is:

“comprised of six video-essay chapters that connect film and video production, feminist filmmaking, and Rhetoric and Composition. Drawing from interviews conducted with ten faculty and graduate students in the field who produce and teach the production of moving images, as well as original footage and clips created by rhetoricians and filmmakers, Cámara Retórica weaves a visual and aural tapestry that performs the kind of feminist, moving-image scholarship it argues can be transformative for Rhetoric and Composition.”

Recently at the Computers and Writing Conference at George Mason University in Virginia, Cámara Retórica was awarded the Computers and Composition Distinguished Book Award, which “honors book-length works that contribute in substantial and innovative ways to the field of computers and composition.” 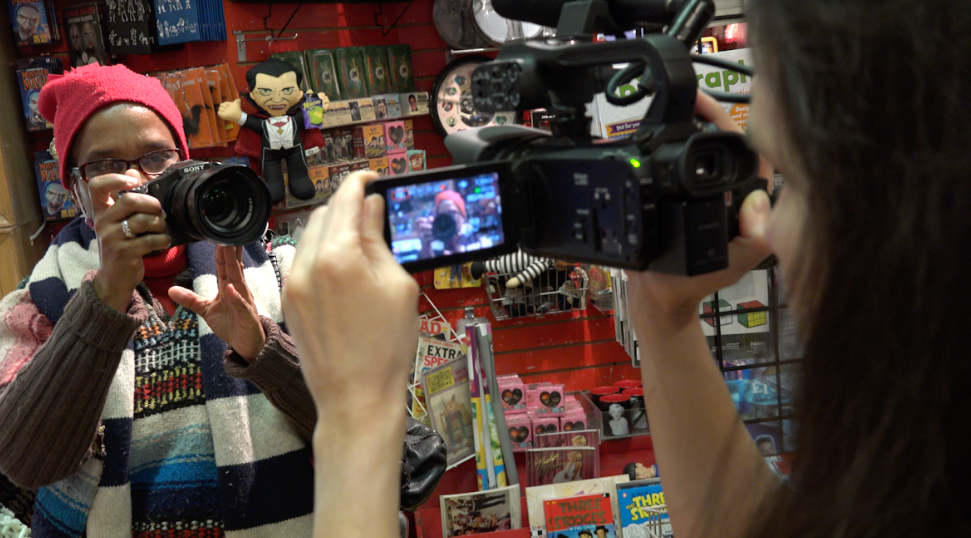 Pictured above: Hidalgo and visual artist Gina Washington film each other.

Hidalgo describes the difficulty many scholars feel when asked to define their scholarship, which oftentimes combines a variety of interests into a niche they feel compelled to work on. Those niches, which do not quite fit perfectly into the various fields, make for delightful study but also result in unease as those fields can tug at scholars to declare their allegiance. Hidalgo writes,

“Since the first year of my PhD, I have been straddling two fields: rhetoric and composition and documentary filmmaking. In a less enlightened discipline, that might turn me into an outsider, but my work, as hybrid as it is, has been received with open arms by my colleagues over the years. However, although I’ve won numerous film festival awards for my documentaries, I’d never won an award for my scholarship. Receiving the Distinguished Book Award made me feel like I’m managing the balancing act of working in two fields. I hope, above all, that it inspires more rhetoricians to pick up the camera and explore film and video production. I’m eager to watch filmmaking continue to evolve in our field.”

The Computers and Composition Distinguished Book Award comes as Hidalgo is in production and editing her second feature documentary titled The Weeping Season. The film, which is 14 years in the making, explores her feelings of loss and love for her father. This poignant reflection on her father’s disappearance and how it has impacted her demonstrates yet again her ability to move an audience through image and narration.

As Hidalgo nears the completion of The Weeping Season, she considers what she wants her audience to feel as her film comes to a close. She writes:

“It’s hard to know what you want an audience to walk away feeling about a film you haven’t yet completed. I hope that they find the story and the characters compelling. You always want those moments as a filmmaker when a everyone gasps or sighs or when you hear quiet sniffles coming from all directions in the room. It means that you’ve moved your audience, touched them in ways that linger for them and are often cathartic. I do hope, and I think we’ll manage to pull this off, that when people watch the finished product they can look back at their own individual, familial, and national losses and feel a renewed urge to turn those wounds into creativity and hope.”

2018 Trailer for The Weeping Season from Alexandra Hidalgo on Vimeo.

The Weeping Season centers on memory, which can be slippery as the passing of time causes recollections to be filtered and re-remembered differently. As Hidalgo sought to find answers about the disappearance of her father, she had to rely upon more than just her memory for this memoir. She writes,

“I’ve been fortunate in having a transformative experience working with relatives and family friends on this film. Everyone I’ve wanted to interview has been ready to talk about my dad and to deconstruct his life, his spellbinding personality, and his vanishing. There are moments when people’s recollections don’t quite match up and those are some of my favorite moments to feature on the film because three decades later you can’t really have a perfectly cohesive narrative. This is as much a film about loss as it is about the worlds we construct through our own personal blend of recollection and longing.” 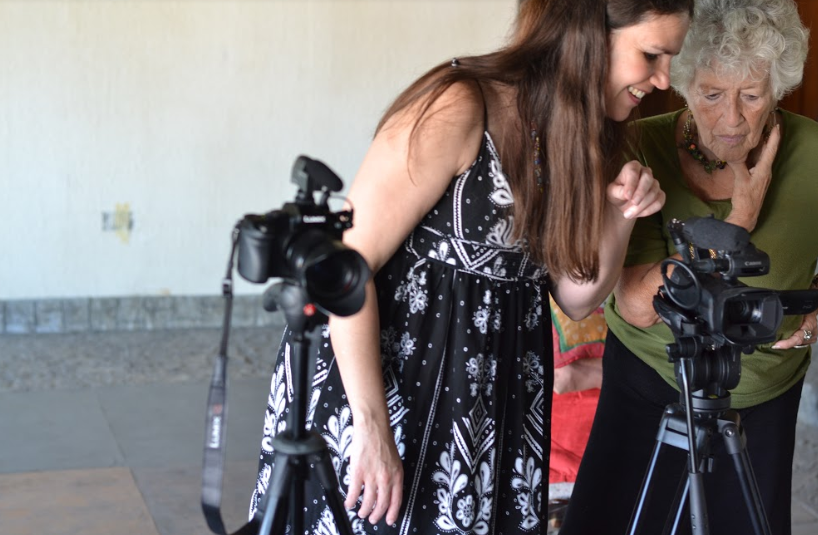 Pictured above: Hidalgo showing her aunt Yarima Hidalgo how the camera works before interviewing her.

Rhetorically, Hidalgo also asks us to consider how we think of and construct memoir in her video essay entitled, “Creating Our Pasts Together: A Cultural Rhetorics Approach to Memoir” published in The Journal of Multimodal Rhetorics. In her essay, she narrates how the difficulties of composition as choices, created in the reconstruction of memory and memoir, significantly impact the text and the lives of those who contributed to the text’s creation. How do we ethically navigate those choices in our compositions? Her answer and exploration of this topic is in the video below:

Cultural Rhetorics Approach to Memoir from Alexandra Hidalgo on Vimeo.

Since finishing Cámara Retórica, Hidalgo has continued her work with feminist filmmaking and maintains her production company’s monthly community letter about the work she’s involved with and what is important in filmmaking scholarship.

“The Sabana Grande Productions Community Letter came from a suggestion from my filmmaking mentor Carole Dean, the brilliant and kind founder and president of From The Heart Productions. She explained that even though most of us have overflowing inboxes, a well-crafted and purposeful community letter can foster a vibrant and personal connection with audiences. So far, even though it seems daunting to come up with engaging content each month—and to do so in two languages, no less—the reception to the letter has been exceptional with enthusiastic responses from a wide range of people, from the expected dear friends and family to people I’ve never met. I think in academia we sometimes feel like marketing and outreach are dirty words, but in film if you don’t create audiences for your work, no one will fund your projects. The great thing about the community letter is that it also allows me to get more exposure for my peer-reviewed publications. It’s time consuming but a fantastic way to get your work out there.”

If you care to see what Sabana Grande Productions is up to, you can subscribe to it. You can also check out their previous issues. In these issues, you can see Hidalgo’s projects use the medium of film to create and expand spaces as they cultivate a spirit of activism which strives to make the world a kinder place for all.

As our society becomes more and more focused on multimodal communication, film and its uses have adjusted how we talk about composition and argumentation in the Composition classroom. This discussion has been uneven and deserves more emphasis. Because she straddles both rhetoric and composition and filmmaking, Hidalgo finds that “it is imperative for scholars to think about ways to reach audiences through the moving image medium that they find so engaging.” She argues in Cámara Retórica, “one can make profound and impactful arguments by uniting the moving image, the sound of our voices, and music. It’s a particularly powerful way to reach an audience and well worth the extra work of learning how to use a camera and how to edit software.” While she does not believe that every scholar needs to go out and buy filming equipment, she does believe “video essays and documentaries will continue to grow in prominence in our field and in academia in general” because “through moving images we’ll reach wider audiences and share our ideas on much bigger platforms.” Learning a new way of composing through video “can pay off in spectacular ways” and is worth the extra work as it can allow us to compose multimodally about issues that matter most to us.