I am a first year MFA student in Dance Composition at the University of Michigan, Ann Arbor, and this past March I attended the American College Dance Festival Association’s (ACDFA) 40th anniversary conference, which was held at the University of North Carolina at Greensboro. Four first year graduate students accompanied ten sophomore, junior and senior BFA students to this four-day conference. ACDFA is a way for colleges and universities from around the country to come together to take class, present dance work in both formal and informal showings, and generally see what everyone else is up to. As a graduate student, I was not only taking class, but teaching as well. I was also asked to sit on a panel of faculty members to watch one of the informal concerts, and provide verbal feedback to the student and faculty choreographers who presented work.

I enrolled in Melanie Yergeau’s Computers & Writing course (along with an MFA poet and PhD students from the Joint Program in English and Education) because my thesis work explores composition for both stage and online/onscreen. This class has given me the opportunity to discuss creation and composition with people who are outside of my genre, but it has taken me by surprise that my colleague’s main concern about including multimodal/digital composition in their classroom is how to assess and give feedback on a creative project. For dancers, it is common practice to both give and receive peer-to-peer or faculty to student feedback about composition and choreography. I now realize that I have taken this assessment experience for granted. I found myself using terminology and aesthetic discourse during class discussions on readings and online multimodal/digital compositions that I would use if I were giving feedback about a dance work. If my colleagues are searching for a metalanguage in order to discuss and assess digital compositions, why not apply the language that already exists for inherently multimodal and interdisciplinary arts such as dance/dance making? What follows are two examples of ways to make connections between the metalanguage of dance composition and interdisciplinary composition in the English classroom.

As mentioned earlier, I had been asked to sit on a panel of an informal concert at ACDFA and give feedback about the work presented. This was the perfect opportunity to put my ideas into action as to whether choreographic feedback could speak to a community outside of the dance world. During this feedback session, I decided to record words that my fellow panelists were using to describe what they experienced during each performance, and then share them with my classmates upon my return.

Here is a photograph of the words collected: 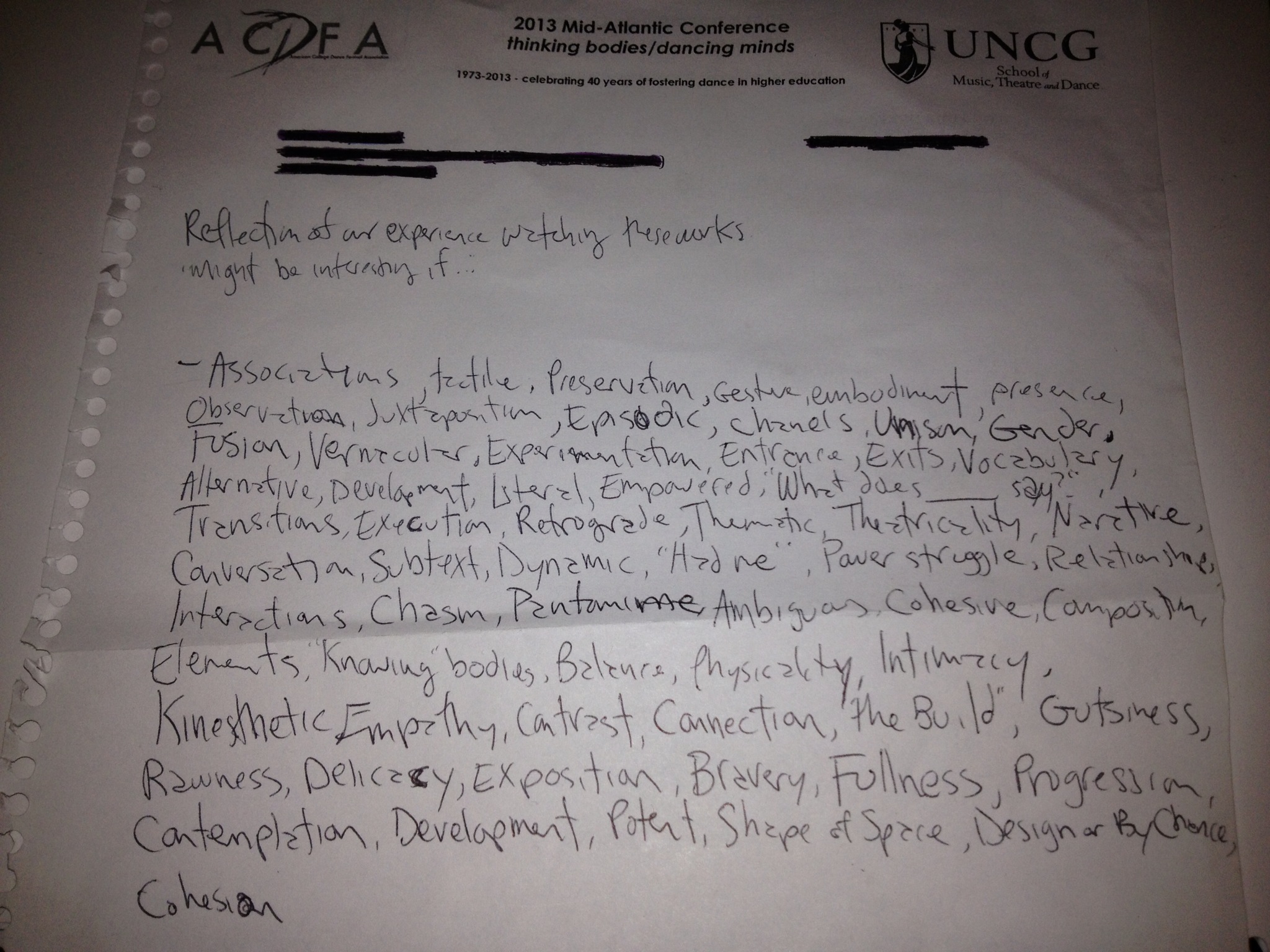 There are some words listed that are obviously dance-specific: kinesthetic awareness, retrograde, shape of space and physicality. However, there are a number of words that I believe can easily be navigated into a conversation about composition of all kinds. I asked my classmates to take a look at my compiled list, and pick out any words that they either already use in their classroom for creative assessments, or that they find particularly intriguing as words that might apply to an English composition classroom.

Here is what they gave me:
(words in bold were listed by more than one classmate):

Many of the words chosen by my classmates had performative connotations, which makes sense if we are searching for how to discuss a visual representation of creative ideas. And while there isn’t a concrete answer to how each of these words might find their way into a conversation about multimodal/digital composition, there are a couple of exciting possibilities. Here are a few of my thoughts:

Delicacy: I find that the idea of delicacy doesn’t always have to do with the intention of performance, but how light (or heavy) a hand the creator uses while putting together their media.

Ambiguity: I believe that ambiguity has the potential for a positive description. The right amount of ambiguity can provide the audience with wiggle-room to make decisions about reason and meaning on their own. Ambiguity can be a powerful device when used appropriately.

Entrance/Exit: These two words can be taken very literally for the stage, but when composing digitally, it is very important to be mindful of how to transition between media; a well-placed cut on action, or fade-in/out are important details that can change the look and feel of a project.

My experience at ACDFA did not warrant graded results of course, but it provided the perfect opportunity to gather a list of words that give an embodied indication about what is seen, heard and felt about a composition. By finding ways to tap into vocabulary from outside mediums of written compositions, a teacher who might be in new territory speaking about non-written work can find ways to articulate themselves to their students.

There was extraordinary work created by the young dancers attending ACDFA; dances that were thought provoking and provocative, complex and dynamic, funny and grounded, collaborative and solo projects, and I was tasked to speak on it all. Of course there were performances that I found more compelling than others, but regardless of what I found aesthetically appealing, I was still responsible for articulating to the dancers and choreographers not only what I saw, but also, how their compositional choices affected the audience

The big news at the 2013 Association of Writers and Writing Programs (AWP) Conference held in Boston last month was the announcement, tweeted and retweeted, that the Zell Family Foundation was donating $50 million to the MFA creative writing program at the University of Michigan. In an Associated Press interview, Helen Zell, in whose honor the program has been renamed, explained the impetus for the donation: “What I’ve watched happen with the introduction of the Internet and media and blogging, I almost feel like this part of our education is under siege. The ability of fiction to develop creativity, to analyze the human psyche, help you understand people–it’s critical. It’s as important as vitamins or anything else. To me, it’s the core of the intellectual health of human beings.”

Ironically, I was at the conference to present, with three other University of Michigan instructors, a panel entitled, “Creative Convergences: Integrating the Arts and Technology in the Writing Classroom.” Each of us showed examples of undergraduate work that used multimedia and genre-blending to create compositions that were aesthetically and conceptually sophisticated. The example I showed, an excerpt from Molly Yaple’s four-part video poem, “Love Poems,” consists of a voiceover of Molly reciting her original text in combination with original and open-sourced video footage, music, and sound effects. The result is an integrated, complex, and moving work of art.

Like Zell, I have had the feeling, when reading responses to news posts or other public forums on the Internet, that literacy is “under siege.” Yet positioning printed literary works in opposition to web-mediated text ignores the potential of digital compositions to not only contribute to our collective intellectual health but to push at genre boundaries maintained by traditional creative writing programs. Of the nearly 500 presentations listed in the three-day schedule of events, less than a dozen included any mention of digital technology in spite of the significant numbers of digital journals registering their presence in the bookfair. If technology integration is part of the pedagogical focus of most MFA programs, you couldn’t prove it by the roster of presentations at AWP.

Any survey of the Web will uncover literary texts ranging from wince-producing to awe-inspiring. The same, however, can be said of a survey of texts in print. Privileging printed texts is a form of literary snobbery that working writers can ill afford to harbor. As digital humanities scholar Cathy Davidson reminds us, “To be valued by one’s time requires making oneself responsible and responsive to one’s time.”

Like many writers, I have a deep and abiding love for books made of ink and paper. But writers who ignore the potential of digital technology for not only distributing but creating texts risk becoming obsolete in their own time. 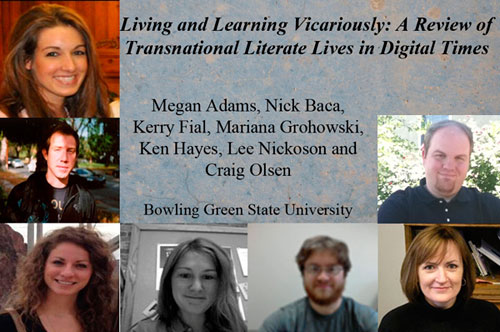 By clicking on the reviewer’s name you will be directed to a reviewer’s position statement that explains his/her method for reading and reviewing TLL.

Nick Baca is a second-year PhD student. His scholarly interests involve queer theory in composition and rhetoric and issues concerning gender and identity.

Kerry Fial is a senior studying Middle Childhood Education. An advocate for adolescent literacy, she presented at the National Convention for Teachers of English in 2012. Her teaching and researching interests center on appreciating student diversity and sparking student interest in learning about the English language.

Mariana Grohowski is a second-year PhD student. Her research examines the cultural ideologies and literate activities of servicewomen of the U.S. Armed Forces.

Ken Hayes is a second-year PhD student. His current research interests focus on the understanding and use of social networking sites and the impact such sites have on academic writing and critical thinking skills.

Lee Nikoson is an associate professor and member of the Rhetoric and Writing faculty. Her curiosity about how we come to know, practice, and study writing drive her research and teaching.

Craig Olsen is a second-year PhD student. Currently, he is researching multimodal and visual rhetoric, which includes digital, comic and gaming literacy. 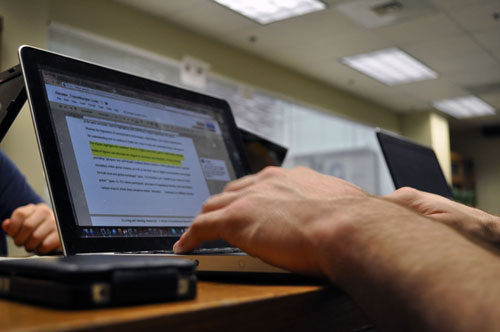 TLL concludes with Hawisher, Selfe, and Berry, in collaboration with Synne Skjulstad, synthesizing chapter findings of this fascinating life-history interview project. The chapter begins by showcasing the digital literacy projects of co-author Synne Skjulstad of Oslo, Norway. This attention to Skjulstad’s scholarship is important to the larger effort of the project because, as Hawisher, Selfe, and Berry admit: Skjulstad’s work “was an inspiration” for the methodology deployed for TLL (“Overview” para. 3). This section offers eight observations which connect the individual literacy narratives featured in the project. Three examples of observations: (1) Participants’ perceptions about technologies depended upon “the cultural ecologies” participants inhabited (Observation. 4); (2) Participants revealed that technological literacies were primarily individually acquired (Observation. 5); and (3) Digital media aided tremendously in the various stages of writing studies research (Observation. 8).

The fifth and final section of the conclusion offers “Closing Thoughts on Research Methodology,” which reflects on “Local and global ecologies,” “Transnational contexts,” “Literacy narratives,” and “Digital media” as four “assumptions and practices that continue to inform this ongoing research,” (para. 3). The metaphor of ecology acknowledges the many factors which contribute to one’s literacy practices while also yielding the awareness of oneself as a citizen of the world. This idea is complemented by the concept of transnationalism, which identifies the various cultural contexts and identities shaping one’s literacy practices. Literacy narratives as a genre help composers “formulate a sense of self”–a powerful implication for both composers and readers (para. 12). Lastly, the area of digital media intensifies literacy, learning, and meaning-making as digital media affords more than print-based documents–providing a richer experience for the composer and reader (as demonstrated by the contributions of this project).

All four areas present rich implications for teacher-scholars, though as the target demographic, we would like to hear about the authors and the influences of transnationalism on their learning. This concept has important implications for learners, teachers, and researchers to address what transnationalism means for the way we go about researching and teaching writing. TLL illustrates the need for writing scholars to further our understanding of the “trans-” in digital literacy practices across various physical, material, political, and socio-cultural geographies. Examining these and other like concepts allow teachers, students, and researchers provide moments of understand all that more fluid use of technological literacies might mean for writing research and pedagogy.